Am I missing somthing here?
Trying to do a nodeside push in v1.

I've pretty much gone though and filled out the node keys and any other configuration needed for the push method, but I can not pass GO.

Am I missing some php-xml package on the FreeNATS server?

Urp. Well... Hmm... The nodeside script doesn't need any XML libs, just PHP 5 so it can do an HTTP-POST which is obviously working as you're getting a response back from the server.

As for the server I doubt it's a library problem or similar as you are getting a "correct" XML error which means the XML parsing functions have fired etc etc but found an error. The weird thing is it's at line one which would indicate there's something pretty seriously up.

We have had a few issues with non-UTF chars from countries using them but that will normally give a much later line number as the header etc will be ok at least (and also shouldn't apply to you).

That should output the XML that would have been posted to testfile.xml and display any errors on the console as it's being run. I haven't doc'd nodeside testing development yet so there's no example output but it should look something like...

If possible could you post this and your config.inc.php to the forum (or email direct if better or secret data contained within - you have my address).

Can you also try editing the config and setting ALL the test types to false and see what happens - this should overcome any weird permission errors etc etc being included in the XML somehow and messing it up.

Let me know how you get on.

I've gone though and done the following like you suggested.
And here are the results.

Final note,
I tried setting anything (in the config sections) from true to false in both config.inc.php and the freenats-node.php file,

I'm going to try and do this on another server, but this time using the pull node side method instead,
I'll post my results if successful ... !

I just tried a node side pull!

Only thing now is, where do i view this cool data?
But the posting part works

I love the concept!
I really hope I can get this to work,
It' could even be a complete replacement to MRTG, which often drives me INSANE!!!
web:// aday.net.au
Top

I'll have a look at the XML tonight but for the moment, with the Win32 box, once you have successfully pushed data if you "Edit Node" then you should see at the bottom:

Add test (the original tests)
Add nodeside monitor - this should be a list of monitors from the Win32 box you can select and then add to be actively monitored.

I'll play with the other XML etc tonight.

Update: Ignore this post - I think I have found the problem - see below. If it's not the problem then try this...

Arr... Me thinks me spoke too soon and too foolishly. I took your XML (which looks fine). It wouldn't parse in anything but only because phpBB had put some spaces in front of every line. Removing them from the first line so the <?xml is right at the start of the line (the others are irrelivant) shows it as valid and it loads into FreeNATS fine (I put it in the filesystem and then just pulled a URL of /home/dcutting/aday.xml).

Just to confirm - the file does start <? without any leading whitespace?

And they then show up in the node edit screen (which is where incidentally you should see any nodeside tests once they have pushed/pulled once): 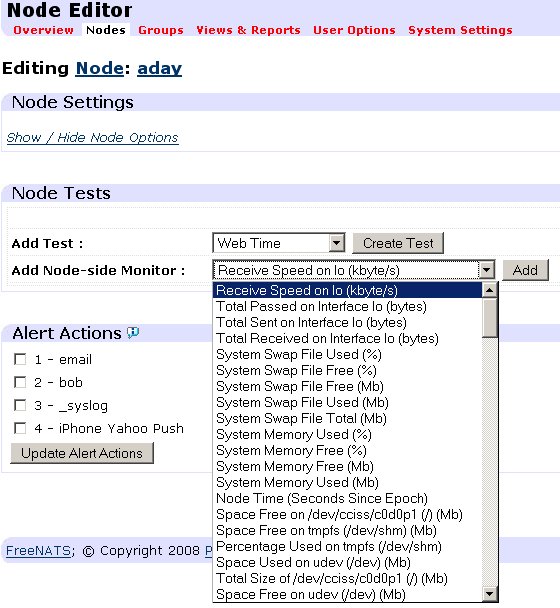 The Win32 does check it gets a '1' back from the nodeside.post.php script before saying "success" which should indicate the Win32 one succeeded. This should mean the XML has parsed ok etc.

Can you check the end of your node.vbs which should look like this:

I'm hoping it doesn't and I've mucked up releasing the nodeside tester - you're getting a success message but actually it's failing.

If they are all failing with that XML error then it certainly points toward an environmental problem with the XML parser (or rather my use of it!).

If just the Linux push and pulls are failing and in fact the Win32 one is working then that is so weird I'm just going to ignore it as a possibility for the time being.

Assuming it is the XML server environment we can try the following:

Local file load
Hopefully the system log will show some more useful output than is just shown to the normal run console. Control-C to exit the log watcher (you may want to wait a few secs at least after the run for useful output to be shown as it only polls every second or so for new entries).

Oh and you'll probably want to set log.level back to something around 5-ish to avoid tonnes of stuff clogging up your fnlog table too much.

If this doesn't provide any illumation another quick check of a similar bit of the system that uses XML parsing is the discovery and import tools. You can see if they are working without affecting the database.
Doing this I get the following:


Let me know how you get on.

If this doesn't work feel free to email me if it's possible to get on for some remote diagnostics.

Ignore the last post... I think I've found the problem.

I think that magic quotes is on for your environment and that seems to break the XML parser (which is surprising).

Anyway I have just bundled up 1.00.10a which has a if (get_magic_quotes_gpc()) stripslashes() bit in the nodeside import which hopefully will solve the problem.

If that doesn't work then please try the previous posts suggestions.

Win AND Gold!
The latest release 10.00.10a fixed it with the Magic Quotes XML Bug Fix!


And its showing up with the option to Add Node-side Monitor!!

Well that is good news. Not that I doubted it for a second you understand...

Now I just have to support it in the import tool and all will be well.

Magic quotes are the bane of my life!!