Version 1 is slowly beginning to take shape. The shape of a massively bugged, horrificly UI'd and dysfunctional codethallu.

Nevertheless production staggers slowly onward and I thought I'd share with you a taste of the sort of features you can expect to drive you to the point of insanity in version 1. These include:
Will wonders never cease? Well yes actually, they will.

Here are some stupidly big screenshots to help bring the internet to it's knees:

The main interface... but not quite as you know it... 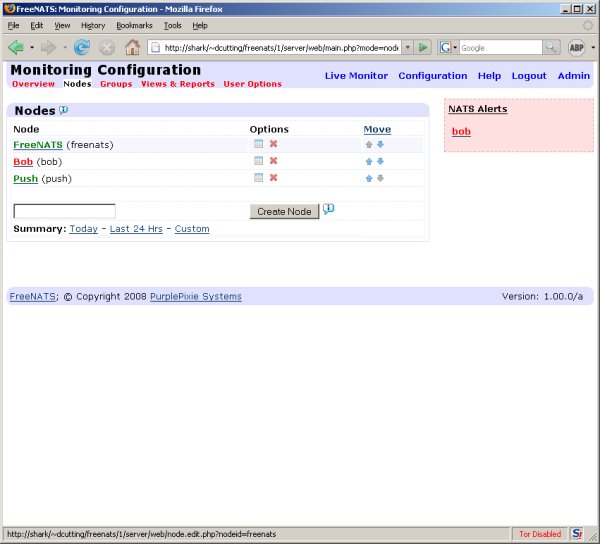 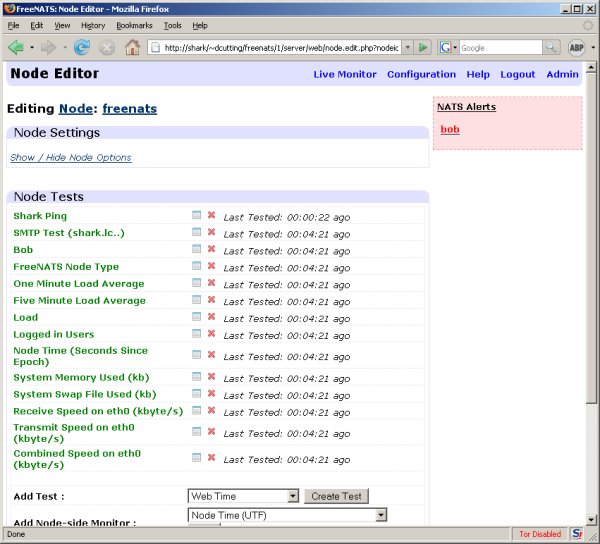 A nodeside network test - this is a freenats 0 test server so you can see the five-minutely spikes in network I/O as the version 0 tester kicks off. Later in the graph the testing interval (to gather network speed) is upped to five minutes so the speed averages out and you don't see the individual spikes

And finally... As a forum poster Aday won the magnificent prize of a camera-phone picture of the v1 interface being tested in IE 7 on my TV. He obviously received the highly valuable high-res original via Securicor Email but for everyone else to dream of here is a low-res replica:

This is available memory in kb from a Windows XP Box.

Yes I have stared into the black abyss that is VBS (or WScript or CScript or whatever it's called) and I have wrestled with the incomprehensible behemoth that is (though I shudder to type it's name) W M I.

And the result is a barely functional and dastardly random (for the moment only one hopes) nodeside monitor for Windows services, RAM, processor use and disk space. Networking is proving to be a bit of a stumbling block.

Which I shall unleash upon the world soon with FreeNATS version 1.

WOW!!!! Memory usage from XP boxes too?!?!!
Can't wait to see the VBS script it's self, and what ever scripts you came out with
/me think's some Linux scripts to calculate system vairables are soon to follow

Might be time I update my source soon
Nicely done!

Well you shouldn't have to wait much longer for a public pre-alpha bugfest release. This will include my most excellent VB skills as a script.

I'm afraid it almost certainly won't work on PHP4. I have just finished integrateing phpMailer so you can send direct to an SMTP host, use SMTP-AUTH etc etc, and that at least is PHP 5 (although if you don't configure an SMTP server then the system will still just use mail() and doesn't even include the phpMailer files). I think if you don't grow tired of sending me endless parse errors then we can get it working for 4 in most functionality at least.

SNMP is more than a bit messed up but very clever. FreeNATS should get SNMP at some point. Unfortunately that point is currently calculated to be 2291

Well, considering stable php is sitting at 5.2.6
I'm pretty much doing away with php4 and any of the legacy applications I've been running php4 for exclusively.

So you wont be getting the php4 parse errors from me

by dave
Surely not joining up with the rest of us cutting-edge radicals just in time for PHP 6 to come out??!?
I love gophp5.org - I especially like the quote:


www.gophp5.org wrote: Internet Explorer 6? You've gotta be kidding. Get a real browser. Seriously. When faced with the problem of making this site function correctly in IE 6, I just gave up. As a web developer I've wasted enough of my life supporting that crappy browser. -RD

by aday
http://rss.slashdot.org/~r/Slashdot/sla ... article.pl
Official Support For PHP 4 Ends (As of 8th of August)

Does that mean people can officially be bitchy towards the php4 users now?

aday wrote:http://rss.slashdot.org/~r/Slashdot/sla ... article.pl
Official Support For PHP 4 Ends (As of 8th of August)

Does that mean people can officially be bitchy towards the php4 users now?